Dozens of Philippine officials surrender after being linked to drugs trade 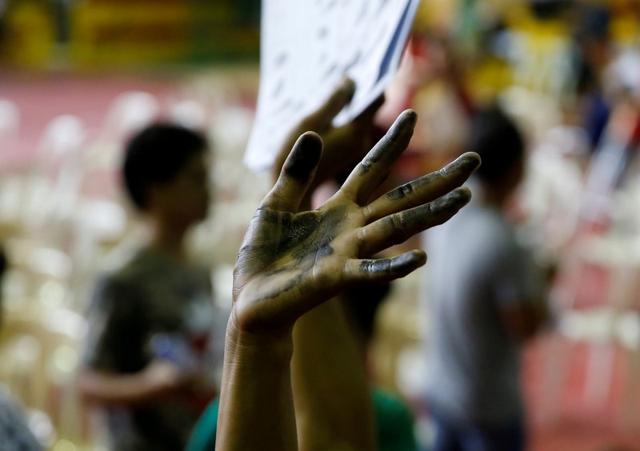 A drug user raises his ink smeared hand after he surrendered to local government officials to take part in a government campaign against drug in Tanauan Batangas, south of Manila, Philippines July 18, 2016.
REUTERS/ERIK DE CASTRO
X
By Manuel Mogato | MANILA

(Reuters) – Dozens of Philippine government and police officials turned themselves in on Monday, a day after President Rodrigo Duterte linked them to the drugs trade, stepping up a war on narcotics that has killed hundreds since he took office in June.

More than 400 suspected drug dealers have been killed by police across the Philippines since Duterte took over, officials say. Broadcaster ABS-CNN put the number at over 800, though this includes executions by anonymous vigilantes.

On Monday, 27 mayors and 31 police officers, including a colonel, went to the national police office in the capital, Manila, to clear their names, fearing the president’s order to hunt them down if they failed to surrender within 24 hours.

Several local officials reported to regional police offices to beat the deadline set by Duterte, who won the elections in May on a single platform of fighting crime and drugs.

On Sunday, he identified about 160 officials in a name-and-shame campaign.

Nicknamed “the punisher” and “Duterte Harry” for his brutal fight on crime, Duterte has hit back at activists incensed by the surge in the killings of suspected drug traffickers.

Alarmed human rights groups have urged the United Nations to condemn the rise in extrajudicial killings. The Philippine Senate is to hold a legislative inquiry.

Dela Rosa reprimanded the police officers on Duterte’s list, threatening to kill them if they continued to protect drug traders and resell seized drugs. At one point, he challenged them to a fistfight.

“I am mad with what is happening,” Dela Rosa said in a speech to local officials and police. “I am ashamed. We should be the ones arresting these people, but we are protecting them. I will kill you if you will not change.”

All police officers linked to the drug trade were disarmed, investigated and could face criminal and administrative cases if there was strong evidence, said national police spokesman Dionardo Carlos.

“They will be accorded due process,” he added.

In a letter, Supreme Court Chief Justice Maria Lourdes Sereno on Monday told the president the court alone had the right to discipline judges. One judge named by Duterte died eight years ago and two others have already been removed.

In his maiden speech to the Senate, boxing icon Manny Pacquiao supported Duterte’s drug war and proposal to restore the death penalty for drug crimes, and advocated execution by hanging or by firing squad.